At Alpro, we are following certain guidelines when setting up our campaigns on YouTube. Therefore, our campaigns are already well-refined before even our ads start serving. The YouTube algorithm rotates the ads in the campaign on its own and throughout time decides, which ad to serve and to whom and at what time. However, we can also monitor our campaigns and do extra tricks and tweaks to improve their performance.

It’s important to check the pacing of the campaign on a regular basis. Is your campaign spending as it should? If not, it might be that the audience size is too small, the CPM/CPV bid insufficient, frequency cap too high etc..

Sometimes, Google decides to take the ad offline because it detects a  violation on the Google policy. When this happens, there is an option to appeal to this violation which should suffice to get the ad running in the short run. It’s highly recommended to take contact with Google support as well when this happens to speed up the process of approving the ad.

If one of the ads in your campaign is not running well, you can choose to switch off the ad (temporarily or permanently) in order to re-allocate budget to other better performing or underperforming assets.

Next, performance can be improved by adjusting your bids on device level: 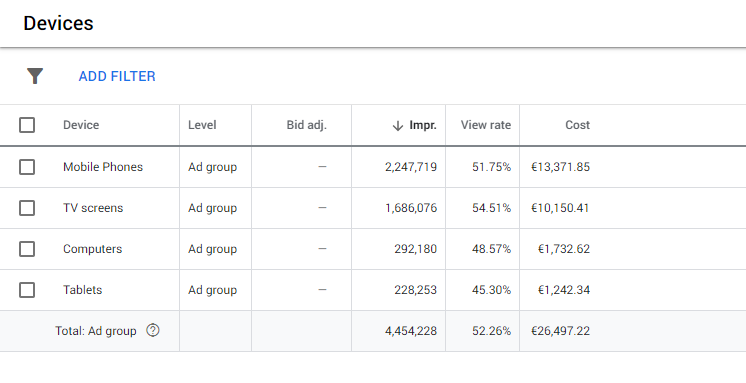 If one of the devices are performing poorly, you can lower the amount of impressions that the device will generate by decreasing the bid on device-level. For that you can select Bid adjustments and decrease the bid on that specific device: